One of the most obvious crimes of the dictatorial regime of Islam Karimov in Uzbekistan is his attitude to his opponents, to the representatives of the democratic opposition, to religious leaders and members of their families.
Despite repeated promises of the authorities about the political reforms, about improving the legal and judicial system on numerous meetings of representatives of regime with EU, U.S., UN, OSCE, EBRD, IMF, and other national and international organizations, the government of Uzbekistan continues its brutal repression against dissenters, oppositioners and religious citizens. Today, your attention is invited to an updated list of prisoners of conscience, and a list of missing people of Uzbekistan.

We appeal to the UN, OSCE, EU, USA, Amnesty International, Human Rights Watch, Reporters Without Borders, the Red Cross and Red Crescent Societies, the international community not to forget the prisoners of conscience in Uzbekistan. Please, raise the question of the fate of these prisoners of conscience who has been arrested just because they thinking as free people and theirs thoughs are different from government. Everyone of this prisoners should be released immediatly and they have right to live as free citizens.

1. Murod Juraev, born in 1952, a former Member of the Parliament of Uzbekistan and the former mayor of Mubarak, was convicted in 1994 for 12 years, since being detained. Recently, he has been convicted again in the colony. Every time some days before the expiration of the term, he (and all prisoners of conscience) sentenced again and again to extra prison term with standard charges "Violations of the regime in prisons." Currently contained in the colony UA 64/48 (Zaravshan). More info: http://www.fergananews.com/news.php?id=19617&mode=snews

2. Mamadali Makhmudov, born in 1940, the writer, the chairman of the Foundation
Culture of Uzbekistan. First convicted 30.12.94 for a period of 4 years. Released under the amnesty, the 09/08/96. Rearrested 19.02.99 according by verdict of the Tashkent Regional Court on 18/08/99 was sentenced to 14 years in prison. He is a colony UA 64/6 (Chirchik, Tashkent region). Kept under strict secrecy. Health status is not known. Mamadali Makhmudov released! Our struggle for freedom for all prisoner of conscience continues!

3. Muhammad Bekjanov, 1954 journalist, a member of the opposition party "Erk", is arrested and sentenced in 1999 to 12 years old, sick with severe tuberculosis, is in prison UA 64/61 (Kasan, Kashkadarya).

4. Samandar Kukanov, born in 1945, a former member of Parliament Uzbekistan, a former director of the tank farm, supported the opposition party "Erk" in 1993 in prison, sentenced to 20 years. Currently contained in the colony UA 64/48(Zarafshan).

6. Farmonov Azam, born in 1978 Human rights activist. After numerous provocations, convicted on trumped-up case, in 2006, to 9 years. Be in UYA 64/71 Jaslyk subjected to brutal torture and humiliation.

8. Abdurasul Hudaynazarov, 1956 Convicted in December 2006 of 9.6 years. The colony was being tortured in the summer of 2008 he tried to commit suicide.

9. Yusuf Ruzimurodov, 1958, journalist and member of the opposition
"Erk" party, judgment of 08/18/99, the Tashkent Regional Court sentenced to 15 years in prison is currently being held in prison UA 64/46 (Navoi).

13. Akram Yuldashev, a religious leader, in May 1999, sentenced to 17 years. A large group of businessmen in Andijan are his supporters and carry out their activities on the basis of his teachings directed to charity, community development without any political activity.

14. Madmarov Abdullah, born in 1972, convicted of religious views, on suspicion of involvement in Hizb ut-Tahrir.

16. Madmarov Abdulahad, born in 1972, was convicted for his religious views, on suspicion of involvement in Hizb ut-Tahrir.

17. Madmarov Abdusamad, born in 1974, was convicted for his religious views, on suspicion of involvement in Hizb ut-Tahrir.

20. Jamshid Karimov, a journalist, was recently released from a psychiatric hospital in Samarkand. Odnko he again disappeared from relatives and friends. At the present time, the fate of Jamshid Karimov is no specific information.

21. Jamol Kutliev, pediatrician. Since 1990, the leader of the "Erk" in Gijduvan district. He was arrested on November 10, 2005 goda.V the investigation was severely tortured. Was charged under articles 159, 216 and 244-1 of the Criminal Code. Bukhara Regional Criminal Court in March 2006, sentenced to 7 years in prison. Contained in the colony UYA 64/3 (village Tavaksai Tashkent region.

22. Hazrat Ahmedov, born 1940, school teacher. He was arrested on November 11, 2005. Lived in Gijduvan. Reasons for his arrest: he wrote poetry. During the investigation, was tortured several times. He was charged under articles 159, 216 and 244-1 of the Criminal Code of Bukhara Regional Criminal Court in March 2006, was sentenced to four years in prison. Contained in the colony UYA 64/3 (village Tavaksai Tashkent region). 2010 he extended the term of imprisonment.

26. Ganikhon Mamatkhanov, 25 November 2009, the district court recognized the Ferghana region Ganikhon Mamatkhanov convicted under Articles 168, part 3 (extortion) and 211 part 3 (bribery) of the Criminal Code of Uzbekistan and sentenced to five years in prison.

27. Gaibullo Djalilov Ombudsman HRSU of Karshi. In January 18, 2010 field trial of Bukhara was sentenced to 9 years.

31. Khairullo Khamidov, born 1975, journalist in Uzbek radio and TV, a popular sports commentator and poet, sentenced the April 27, 2010 of the court Yangiyul district,Tashkent region to six years in prison.

32. Maxim Popov, born in 1982 Civil society activist, was sentenced to six years in June 2009 for the publication of the fight against AIDS.

33. Dilorom Abdukodirova, witness of the mass execution of thousands of protesters in Andijan, sister Mahbuba Zakirova who boldly addressed the Supreme Court of the Republic and directly accused the regime" in the massacre of citizens in the Babur Square in Andijan, which was worse than the German Nazis shot his enemies". D.Abdukadyrova fled during the massacre of citizens and with help of UNHCR came to Australia. However, the authorities by means of deception and blackmail his family have made it come back to home. She has been arrested in Tashkent Airport immediately after arrival and sentenced to 10 years in prison.[/b]


PRISONERS OF CONSCEENCES WHO PROBABLY SECRETLY MURDERED AFTER ARREST OF POLICE AND SECRET SERVICE:

Utaev Abdullah, Chairman of the party "Islamic Renaissance", He was arrested by 4 agents of The National Security Service near his home on December 4th 1992.( with witnesses). However, the authorities in 2008. declared it as a missing person to the federal wanted list of the Russian Federation (http://vroziske.net/id258151 ), which leads to the conclusion that maybe A.Utaev killed while being tortured in a prison or detention centers NSC or MIA, and then declared as missing. The reason for this is the fear of the authorities ahead of the wave of protests of relatives and supporters of Utaev. Authorities to keep secret the place of his burial. (More info: http://www.uzbek-people.narod.ru/delo_1.html , http://www.centrasia.ru/newsA.php?st=1064748960 )

Abduvali Mirzaev,very popular and known imam in Central Asia, he worked in Andijan, arrested by agents of the National Security Service at the airport in Tashkent in August 1995. before flying to Moscow for a conference on Islam. Probably killed under torture in one of the detention centers NSS or MIA. The grounds for such suspicion is that in 2008, measles Abduvali Mirzayev has been declared as missing person (http://vroziske.net ). Authorities to keep secret the place of his burial. The reason for this is the fear of the authorities ahead of the wave of protests of relatives and supporters of A.Mirzaev.
(More info: http://www.uznews.net/news_single.php?lng=ru&cid=27&nid=1146 , http://www.uznews.net/news_single.php?lng=ru&cid=27&nid=915 ,
Mr.KARIMOV! STOP SECRET ASSASSINATIONS
https://forumuzbekistan.forum2x2.ru/t363-topic#770 ).

Ramazan Matkarimov, student and assistent to Abduvali Mirzaev, was with him and was arrested together with his teacher. Probably killed under torture in one of the detention centers of NSS or MIA. The grounds for such suspicion is that in 2008, declared a Ramazan Matkarimov the authorities as missing person (http://vroziske.net ). Authorities to keep secret the place of his burial.

Husniddin Nazarov, son of Imam Nazarov Obidkhon measles. He was arrested near his home on May 16, 2004. (Http://www.centrasia.ru/newsA.php?st=1094012640 ). Probably killed under torture in one of the detention centers of NSS or MIA. The grounds for such suspicion is that in 2008, declared a Husniddin Nazarov by authorities as missing person (http://vroziske.net ). Authorities to keep secret the place of his burial. 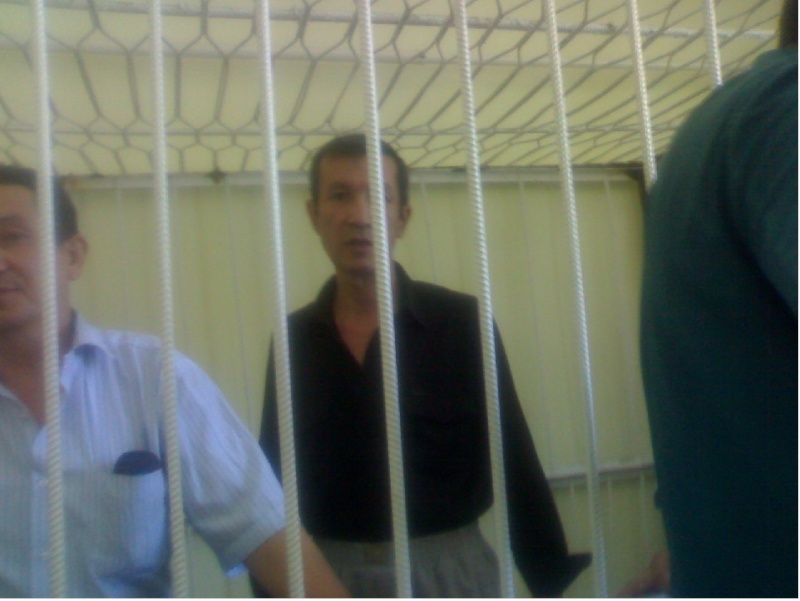 YOU CAN SIGNED THIS PETITION HERE:
http://www.causes.com/actions/1701475?recruiter_id=180041295&utm_campaign=invite&utm_medium=wall&utm_source=fb