The most dangerous and violent crimes committed in the world today are not from some groups or psychopaths but from people in suits and ties, managers of major military-industrial corporations.

They working for to developing of a modern high-precision weapons, with powerful destructive force and then put enormous effort to sell their products. How to sell millions of rounds of ammunition, rifles, pistols, mines and bombs, hundreds of thousands of fighters, destroyers, submarines, tanks, guns and other weapons, if anywhere in the world is not going a war?
You ever thinking about this question? If not, then it is time to reflect and figure out - how and to whom they can sell numerous weapons of death.

And when you think about it so you easily can to draw the conclusion that these rich people are willing to spend their billions to corrupt politicians so that they in turn voted for a war against of any state. How to go to war if there is no reason? Do you think this is so complicated - to find a reason to start a war? No, this is not difficult. Moreover, the U.S. and the coalition has shown openly when they started the war against Iraq, that it is possible to go to war against any state without any reason - for to meet the requirements of the MIC.

WHAT IS GOING AND WHAT CAN WE DO?
We simple citizens, are easy extraction and victims of an alliance of politicians, lobbyists and representatives military - industrial complexes, their uncountable, various production.
Theirs supermarket is the very big and gigantic area of military actions, terrorism and gangsterism anywhere in the world.

This category of people includes not only gangsters from the street but also armed forces of the countries and people who create weapon, write application of the weapon and plans of action: gangsters or army.
Ours reaction and our actions decrease proportionally to distance between us and a scene of action of violence:
- We REACT most strongly when the trouble concerns personally us and ours relatives;
- We DON`T REACT when the trouble concerns the citizens living in the far countries and other continents;
- We WORRY about far continents only when ours relatives are at war there on call of authorities.
- We DON`T WORRY, we do not reflect and we are not interested about what ours soldiers do in those edges far;
- We UNDERSTAND that it is necessary to protect the Homeland, the house and the relatives;
- We DON`T UNDERSTAND, that other people from other countries to think as well as we - you and me, they too wish to protect the Homeland, the house and the relatives;
- We ARE INDIGNANT, when citizens of those edges far kill ours soldier, protecting itself, the house, the country and attack us;
- We ARE NOT INDIGNANT, when ours soldiers kill defenceless children, women and old men in those far countries;
- We REPRESENT, how it is heavy to operate the country, to create strong Army and the modern weapon for protection of the country;
- We can not represent - How and for what is using this Army, these supermodern instruments of murder; we do not represent about authorities operation; they can deceive us, ours children, calling them to be patriots, protect the Native land by Warning-attack and Preventive attack against "POTENTIAL ENEMIES " far in other continents for the sake of satisfaction of the political ambitions and an ambition of aggressive politicians, generals and admirals;
- We are surprised to waves of economic crisis not thinking that billions of dollars, the euro, pounds sterling, roubles, yuan, etc. has spent for war, on creation and accumulation of a different sort of the weapon of the highest class, ultrahigh accuracy, high destroying force, high efficiency on destruction of alive force, i.e. people - first of all children, women, old men and after the well protected soldiers of "enemies" invented of ours politicians;

- We ARE NOT SURPRISE about that the national economy cannot sustain such budget when Weapon Industry, the Ministries of Attacks and the Ministries of National insecurity, devour all means which could be used for peace development of the country that these power structures always require the existence of "the enemy" and front of actions which can be created artificial if they are not existing actually.


However now we have to say: STOP! We cannot accept all this! We should stop this VICIOUS CIRCLE of the HARM which circulated already for a long time and continued to kill innocent people by inertia plus owing to efforts small groups of businessmen - lobbyists, representatives of Weapon Industry, military leaders, aggressive politicians. 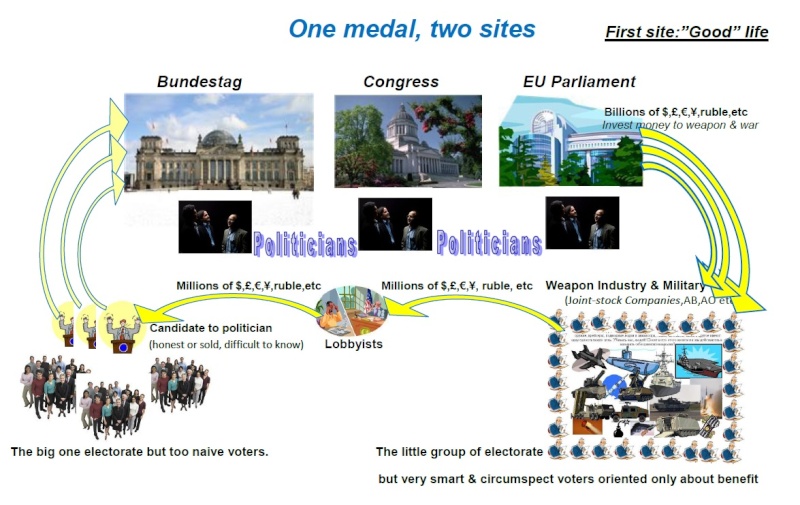 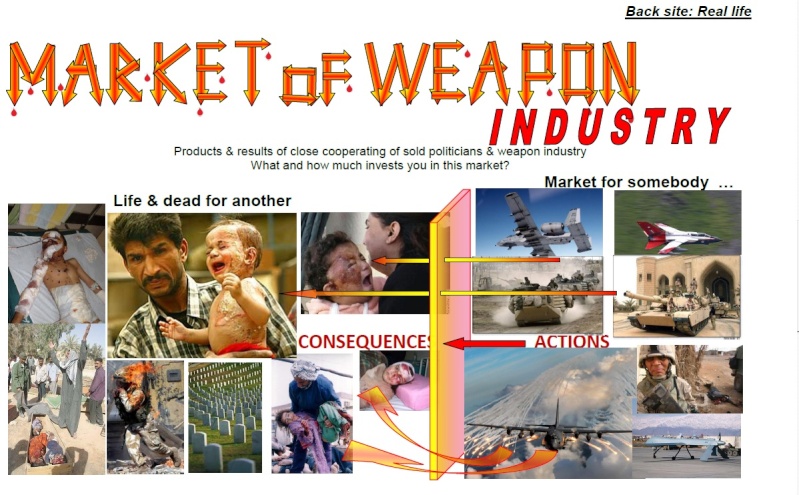